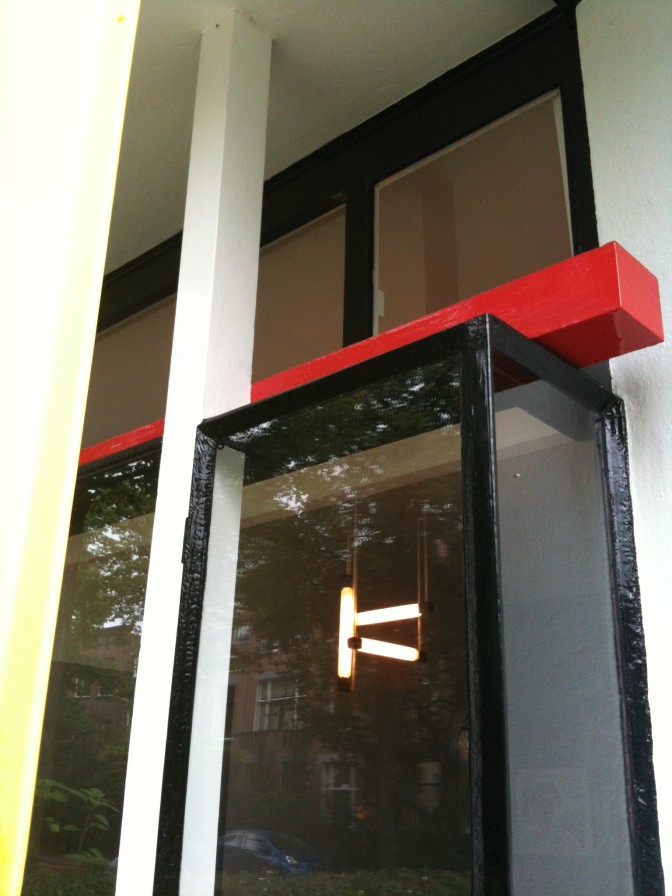 After visiting this building (with patient, but also interested designer friends), all I could say with child like excitement was “AWESOME!”. I said that exactly like I said it after seeing the first Transformers movie. Considering that my friend, Katie, referred to the Schröderhuis as the “Transformer house”, my identical reaction seemed not terribly coincidental after all.

On first impression, the building looked quite small from the outside, and perhaps even a bit fake. I wasn’t sure what to expect since I hadn’t studied my modern architecture history recently. Nonetheless, even for the modern age, what a fantastical (if odd) structure.

There are so many moments about experiencing this building that are transformative. I pick the top 3:

Inside/ Outside White Vertical Beam

1. The corner window: With white gloves, the tour guide opened with such finess first one window, and then the other. A fine example of the technological progress at the time, the building used steel beams for support allowing the building to be freed from structural corners. I tell people that I cried a little to myself in this moment.

2. The interior/ exterior beam: On the first floor in the study room, there’s a white beam that exists both inside and outside the building. Rietveld considered every detail in his vision for the building- a perfect example. The tube lamp in this photo- RAD.

3. The second floor transformation: Sigh. When moving from the first floor plan of separate small rooms, one walks up the stairs to the wide open floor plan of light and openness. A carefully planned experience, I was deeply moved by the transition only to be further astounded by the moving walls which when moved into place created separate rooms for sleeping from a shared living space. The scale model shows the open floor plan, including the color scheme which dictates the various (to be) enclosed spaces.

Rietveld also designed one of my other favorite buildings, the Van Gogh museum in Amsterdam. It is truly a shame that photos are not allowed by the public in either space. Lastly, I want to note that prior to visiting the Schröderhuis, the OBA was my favorite building in the Netherlands. That has now been officially trumped by Rietveld’s truly incredible creation, the Schröderhuis.