I’ve been eager to visit the Great Court of the British Museum due to the sheer volume of space the glass dome covers. The British Museum was the first on my list of multiple buildings I hoped to visit on this trip to London. I didn’t make it to all of the ones on my list (Tate Britain, St. Peters, British Library etc)- but I have to say that the sheer accidental discoveries along our routes, including traveling by bus from South London across the London Bridge north to Shoreditch, exposed me to a wealth of unique, thoughtful architecture that just seems to be so much the norm of the city. I’m excited to go back and dig further.

The premise of the Great Court space is basic in and of itself in terms of wanting to make an external space more usable, considering the weather conditions in London. This leveraging of prime real estate and the juxtaposition of classic architecture with modern architecture was a pattern that became clear during my visit. I’m left wondering how many other nooks and crannies of interesting reuses of space must be littered all about London.

We entered the British Museum through a side entrance, and so the great facade that presents itself as the main entrance was more of an after thought than an introduction to the scale of the building itself.

We made quick work of finding the Great Court and I have to say that despite the controversy, I have to say that the space is incredible light, practical and does do justice to the scale of the other massive internal spaces housed in the British Museum.

Modern technology does not offer all the best answers, but one of the delights it does offer is the ability to open up large horizontal spaces, rather than just vertical spaces. 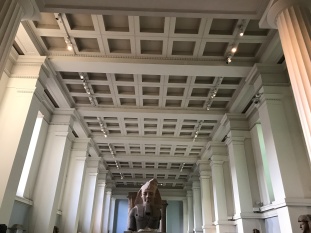 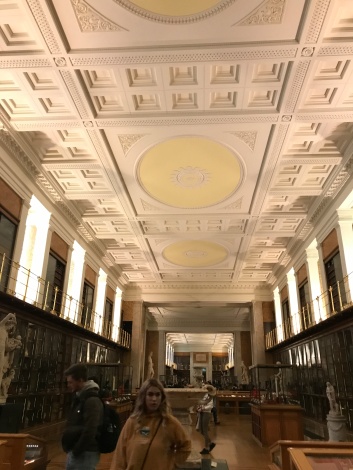 The “Enlightenment” room is absolutely massive and really took my break away in a way that the Great Court didn’t. It does provide a good contrasting point between the types of experiences that can be created through modern technology. Rather than relying on vertical space to allow light into a space, the Great Court uses the entire horizontal roof to create a completely different experience. The transition from each of the large side galleries into the Great Court is like a breath of fresh air- which is really welcome in my opinion.

What I took away from the Great Court was the perspective achieved in the pattern used in the glass roof. From every angle, the roof provided a sweeping, grand feeling, in no way limiting or imposing on the space below.

I didn’t go into the gallery space in the center of the Great Court due to limitation of ticket sales, but I’m left curious how that space works. The stairs surrounding the center cylinder are at a scale that does reflect the grandioseness of the museum in General. Everything in this place, aka the British Museum, just seemed huge.

I definitely recommend taking a moment after exploring the other rooms in the crowded British Museum galleries to sit and take in the Great Court. If I lived in London, I would gladly find relief here.

Special thanks to Shikhiu for sharing his pictures in these 2019 London posts. 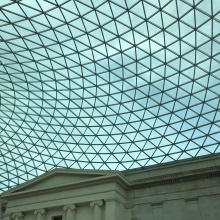 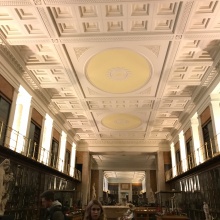 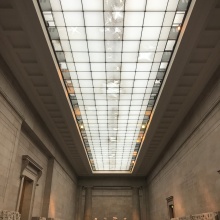 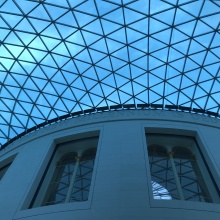